We’ll have more on Zurich tomorrow, but I wanted to take a second to review some of the books I’ve been reading. The opportunity to be a full time author really means two things. I write more and I read more. So far, I’ve been working back up to the levels of writing production I had before leaving (it’s a new place, with new ideas, with new distractions for my new books). But my reading gears have been firing a mile a minute. I guess here it’s a kilometer a minute. Whatever. So I have a few quick takes on the books I’ve read and why you should read them, too. 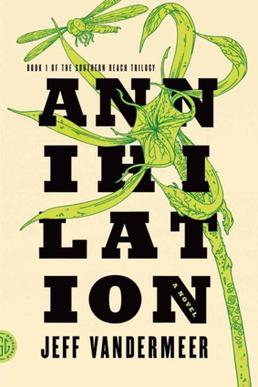 This book just won the Nebula Award and it was absolutely deserving. Told from the perspective of an unnamed biologist, Annihilation documents the efforts of a company to explore a contaminated zone known for producing odd effects on any person that crosses it’s borders. Past crews have committed suicide, murdered one another, or even returned as shells of their former selves. The biologist enters the contaminated area with three other women, each unnamed but fulfilling a specific role, and the story follows the haunting disintegration of their group.

My favorite thing about this book is the tension. You have to turn the page. You have to know what’s going on and why it’s happening. Vandermeer does an excellent job not only introducing bizarre, alien forms (the tower and the crawler), but shrouding them in a mystery that the character and reader are both hoping to unveil. I also enjoyed the narration of a science-oriented person. Not being very scientific myself, I thought Vandermeer did an excellent job funneling his descriptions through that viewpoint.

2. The Girl on the Train – Paula Hawkins

Really, if you liked Gone Girl, you’ll like this. Told from three female perspectives, this novel unfolds the mystery surrounding a missing persons case through the eyes of loosely connected individuals with some major, major flaws. Hawkins uses one of her main character’s issues as an alcoholic to hide the happenings of the night in question. What results is a fast-paced and unexpected page-by-page discovery of what really occurred and who was really involved. Hawkins presents each character without apology, and twists the knife of their despairs and hopes and dreams on every page.

This is my current read, and I’m loving it. The story centers around a company of Shakespeare actors that are roaming around post-apocalyptic Michigan, performing for the survivors of a world-wide tragedy. So far, Mandel’s winding her story through a number of narrative forms and skipping from present to future to past. We’re hyper-focused around the life and interactions of Arthur Leander, a famous Hollywood actor who dies on the first few pages during a King Lear performance. What’s impressed me most is Mandel’s handling of form and structure. She does some summary structured chapters that are just brilliant.

Upcoming Read: All the Light We Cannot See

That’s all from Zurich for today! Thanks for reading!

One thought on “Zurich – Day 7 – A Bookish Update”